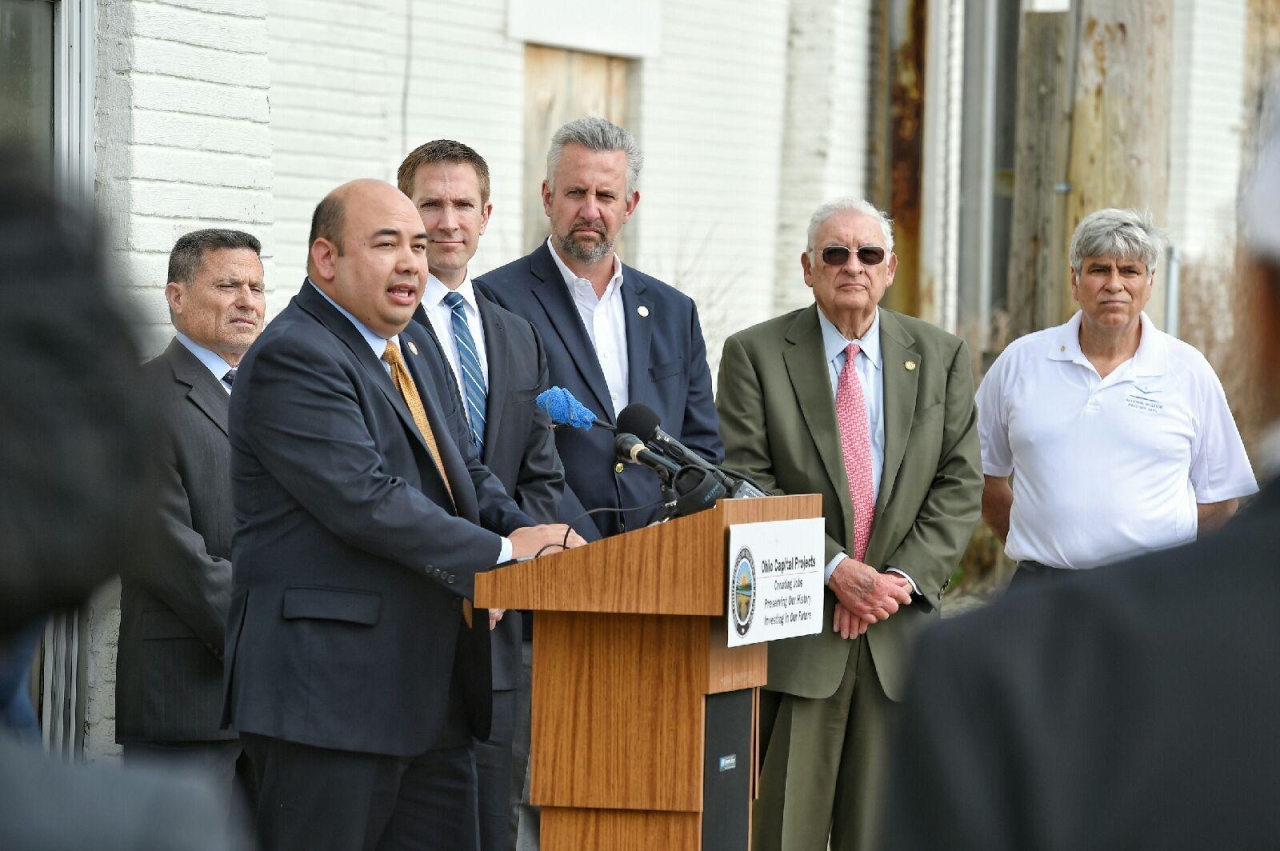 Speaker Rosenberger, along with Dayton-area lawmakers, advocated for the funding through a capital appropriation in House Bill 390, which was approved by the House on May 25th.

“Wilbur and Orville Wright invented the airplane in their Dayton bicycle shop, and their factory made Ohio the birthplace of America’s aviation industry,” Rosenberger, who is also an Air Force veteran, said at a press conference in front of the factory.

“This funding allows us to preserve these buildings for future use by the National Park Service so that we can tell the story of how Ohio, and America, became the aerospace powerhouse that we are today,” he added. “It also gives a critical boost to ongoing activities aimed at transforming this site from a brownfield to an economic asset.”

The buildings stand on a 54-acre site that was once the Delphi Home Avenue auto parts manufacturing plant. It’s located between West Third Street and U.S. 35 and intersected by Abbey Avenue.

Built by the Wright Company in 1910 and 1911, the factory’s two structures were the first in America built for airplane manufacturing.

NAHA’s goal is to put the factory in the hands of the Dayton Aviation Heritage National Historical Park, where it would complete the story of the Wright brothers’ invention, development and commercialization of the airplane in Ohio. The Park Service has asked Congress for $450,000 to acquire the buildings.

NAHA has been working with federal, state, local and private entities to save the Wright brothers’ factory since Delphi closed the plant in 2008. Approximately $5 million in public and private funds have been invested in clearing the site of all but a row of attached structures, which include the Wright factory buildings.

“This funding makes it possible for NAHA to acquire the factory and preserve them until the National Park Service can accept them, and it allows us to ensure that the surrounding property is redeveloped in ways that benefit both the national park and the surrounding neighborhood,” said Frank Winslow, chair of NAHA’s volunteer board of trustees.

“We are thrilled the State Legislature shares our community’s commitment to this important economic development project. Our region identified Dayton Aviation Heritage Development Project  as one of our top three regional priorities through our Priority Development Advocacy Committee, and we’re grateful to the Speaker and the Legislature for their support,” said Jeff Hoagland, president and CEO of the Dayton Development Coalition. “A century ago, The Wright brothers’ factory produced some of the world’s first airplanes. Today, we are closer to the dream of seeing manufacturing taking place again at this historic site.”

Rep. Rezabek: “The Wright Brothers are not only a treasure to the Miami Valley region and our state, but to the nation as well. With this funding, we will be able to continue to honor them at the Wright Brothers’ Factory, and that is something of which we can all be proud.”

Rep. Antani: “This project will benefit the entire Dayton region. I thank Speaker Rosenberger for recognizing the importance of the Wright Brothers and their rich heritage in Dayton.”

Rep. Butler: “Preserving our history is vitally important because it helps us remember who we are as a people and that we are capable of accomplishing much. There have been few innovators more bold than Orville and Wilbur Wright, and securing this funding honors their legacy, and our region’s past and ongoing importance in America’s history.”

Rep. Perales: “The Wright Brothers’ Factory is an incredible piece of history that we are fortunate enough to have situated right here in the Miami Valley. For millennia, man only ever dreamed of flying like the birds. Then the Wright Brothers came along and, against all odds, made that dream a reality; revolutionizing transportation and paving the way for an explosion of technological innovation in the 20th century. I am delighted that additional funding will be going to preserve this site, and to secure the preeminent place that Ohio holds in aviation history.” (Rep. Perales also chairs the Ohio Aerospace and Aviation Technology Committee.)