The lawmakers, both former public school teachers, said charter schools should conduct the same teacher evaluations as public schools, and that the state’s third grade reading guarantee should be equally applied to students on state vouchers. They also want to see a state study commission in place, one that would review the effectiveness of charter school regulations and issue findings to the legislature and governor.

“To truly provide an adequate and equitable education for our children, all schools must be at the same starting line together with the same final goals in mind,” said Rep. Fedor. “These bills would move our state closer to that balance while putting common sense reviews in place to measure the effectiveness of charter school regulations.” 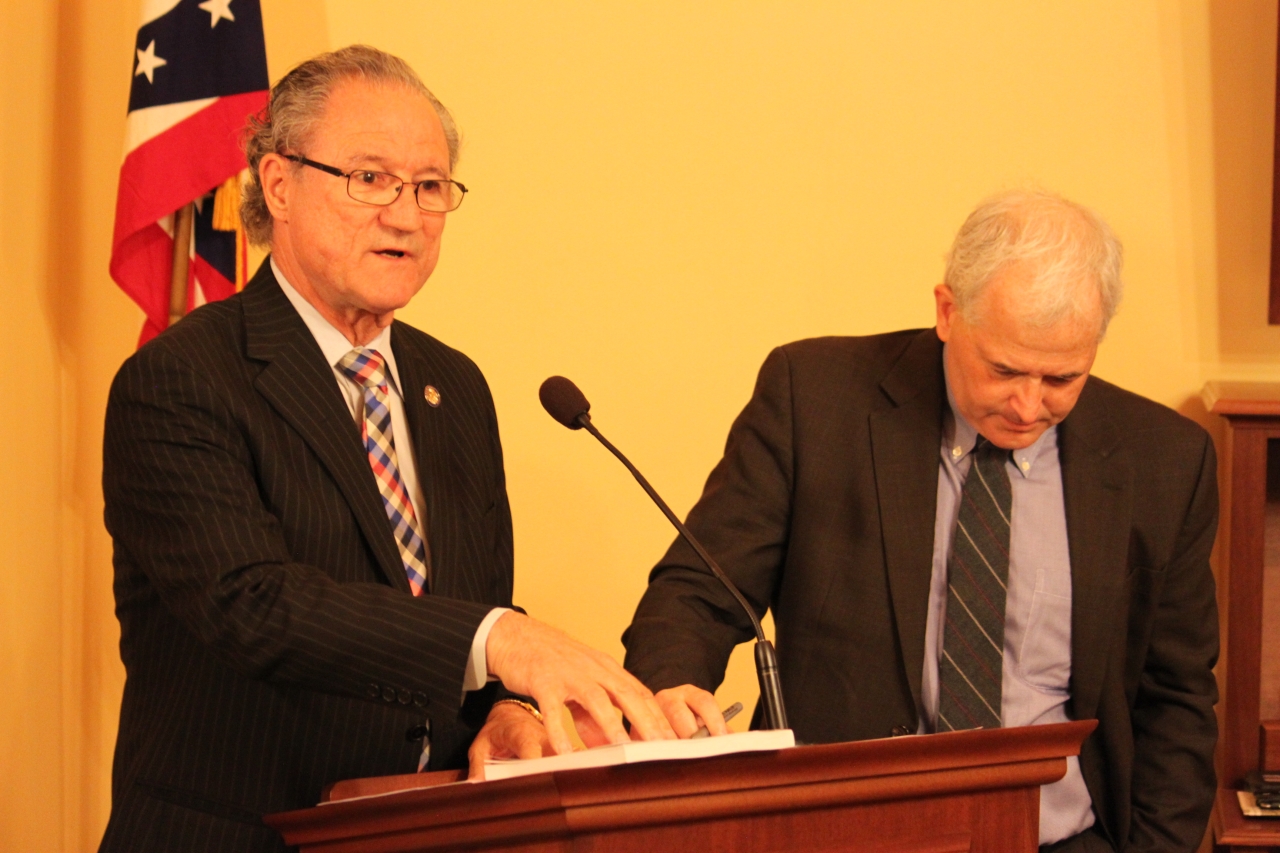 Ohio House and Senate Democrats on Thursday sent a letter to Ohio Secretary of State Jon Husted urging him to implement a checklist of positive suggestions for putting the voters first and truly making it easier to vote in Ohio. Highlights include suggestions to restore early voting, let voters search the Secretary’s website by their home address for their polling place, allow all Ohioans to use online voter registration and comply with Ohio’s laws for voter instructions and public comment on directives.

Most House Democrats today voted against House Bill 375, legislation that increases the tax rate on oil and gas drilling to largely pay for an income tax cut in Ohio.

House Republicans’ plan to alter Ohio’s severance tax to two and a-half percent and would establish Ohio as the only state in the country to require oil and gas revenue—which is predominantly generated in rural and Appalachian working-class communities—to pay for an income tax cut that disproportionately favors Ohio’s wealthiest citizens.

A review of oil and gas taxation policies across thirty-five states that levy a tax or fee on drilling production shows that no state uses any amount of oil or gas revenue to pay for any level of income tax reduction.

Quotes from Democratic lawmakers throughout the state are below:

“Ohio Republicans will stop at nothing to pad the pockets of the wealthy and well-connected. No other state in the nation uses taxes on oil and gas to fund tax cuts for millionaires. This is a missed opportunity to do the right thing by Ohio’s local communities that are on the front line of confronting new challenges from this burgeoning industry.” --Democratic House Leader Tracy Maxwell Heard (D-Columbus)

“It is a sad day when we have the chance to make a difference to an entire region of the state and fall short of that goal. I have worked with local elected officials and economic development leaders over the last few months on this issue.  All have emphasized

State Rep. Kathleen Clyde (D-Kent) on Thursday released the statement below in response to the filing by the ACLU of a new lawsuit to restore early voting access in Ohio. The lawsuit challenges Senate Bill 238's elimination of Golden Week and Directive 2014-06's elimination of evening voting and the final 2 and 1/2 days of early voting.

State Rep. Connie Pillich (D-Montgomery) today renewed her call for greater accountability and oversight for the office of the Inspector General (IG) in light of Tuesday’s reported failures to adequately investigate the “Coingate” scandal.

Specifically, Inspector General Randall Meyer failed to initially investigate the involvement of former Gov. Bob Taft in the decade-old scandal, citing a prohibition on examining expunged criminal records. Nearly no mention of the former Republican governor is contained in the IG’s long-awaited report on Coingate, yet Taft’s record is still public according to the Franklin County Clerk of Courts’ records and Taft himself. Meyer has now reversed his opinion, announcing he will revise his report to include Taft's connection to the matter.

“These mistakes are proof positive that reform is needed to remove any possible partisanship from the Inspector General’s office and give the taxpayers the accountability and oversight that they deserve," said Rep. Pillich.  "Moving forward, I hope that the process for selecting the state's top watchdog follows the bipartisan guidelines laid out in legislation I introduced more than a year ago so that we can ensure politics do not sway the Inspector General's investigations of the executive branch."

Rep. Pillich’s proposal—House Bill 76—takes the appointment process for IG out of the governor’s hands and requires the four legislative leaders to appoint an inspector general by majority vote. The bill also restricts political activity for the IG and all employees of the IG, guidelines that are currently in place for other state administrative and legislative employees. The IG would serve a six year term subject to appointment and removal by a simple majority vote from the four legislative leaders.

On Monday, State Rep. Matt Lundy (D-Elyria) called for the Ohio Department of Rehabilitation and Correction (DRC) to terminate its contract with the state’s privately-run prison food service staffing company, Aramark Correctional Services. On Friday, the DRC released a quarterly report indicating that the company did not provide adequate staffing nor meet sanitary regulations and dietary needs. DRC issued a $142,000 fine to Aramark for the specified failures and indicated that the company could lose its state contract for “persistent defaults.”