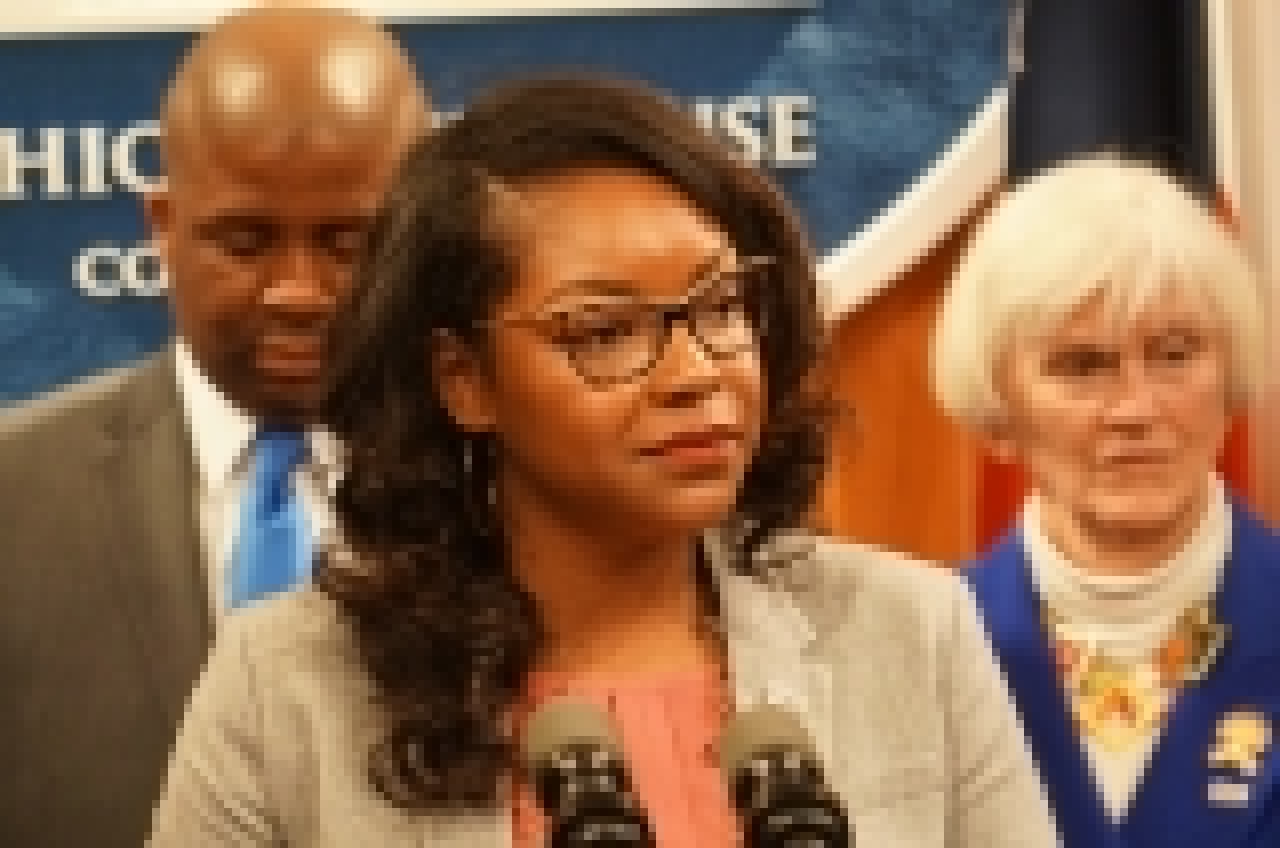 House Democratic Leader Emilia Strong Sykes (D-Akron) today joined House Dem lawmakers to discuss their legislative framework to give Ohioans greater access to the tools they need to live the American Dream, including plans to strengthen public education, grow wages and expand opportunity for working people and families across Ohio.

“A decade of broken promises has made living the American Dream unattainable for too many Ohioans,” Leader Sykes said. “Restoring the promise of the American Dream here in Ohio begins by investing in our children’s education, expanding opportunity and affording greater equality and dignity to working people and families.”

“Everyone should have a choice to what their path is to the Ohio promise of the American dream. Whether it’s college and higher education, trade careers through certificate and credential programs, or being a well-rounded individual ready for all challenges in the workforce and life; you must have a strong foundation of a good pre-K through 12 education,” said Rep. Robinson.

“For most people, this will be through our public schools. So our top priority needs to be making certain everyone has access to a well-supported, equally-funded and strong public education. Like all foundations, the structure of the American dream will crumble if we don’t support the base, and that’s our children’s future.”

In addition to K-12 fixes, Democrats introduced a Student Loan Bill of Rights, sponsored by Rep. Randi Clites (D-Ravenna), which would help Ohio college students navigate an ever-changing and complex student loan system, which she says will save students money and help keep them here in Ohio after graduation.

“As a recent college graduate currently navigating the complex student loan system, I know firsthand the impact the student loan crisis is having on students, on our communities, and on our economy,” said Rep. Clites. “We need to protect Ohio’s students and restore Ohio’s promise as the best place to go to school, raise a family, start a business, and live the American Dream.”

“Ohio House Democrats are working for you, and the Ohio Fairness Act introduced by Representative Skindell will curtail discrimination based on gender identity, expression, or sexual orientation.  I totally respect and appreciate the diversity I find in Ohio, and promise that Ohio will soon be a more open and affirming state ,” said Rep. Mary Lightbody (D-Westerville), who is sponsoring a measure to ban the debunked practice of conversion therapy for LGBT youth in Ohio.

Finally, Democrats called for action on several proposals affecting Ohio seniors, including Rep. Juanita Brent’s (D-Cleveland) bill to ensure the safety and security of Ohioans living in long-term care facilities by allowing them to place video monitors in their personal spaces.

“Part of Ohio’s promise is the opportunity to retire with dignity. This bill ensures that opportunity by protecting the most vulnerable with elective electronic monitoring, a second set of eyes that will help keep Ohio seniors safe and secure,” Rep. Brent said. “It’s another commonsense bill that keeps our promise to always work for you.”

The rollout comes as part of the caucus’ ongoing Ohio Promise campaign, their legislative framework to expand opportunity for working people and restore the promise of the American Dream for all Ohioans with good paying jobs and an economy that works for everyone.

Here is a link to the press conference in its entirety: https://ohiochannel.org/video/press-conference-expanding-ohioans-pathway-to-the-american-dream