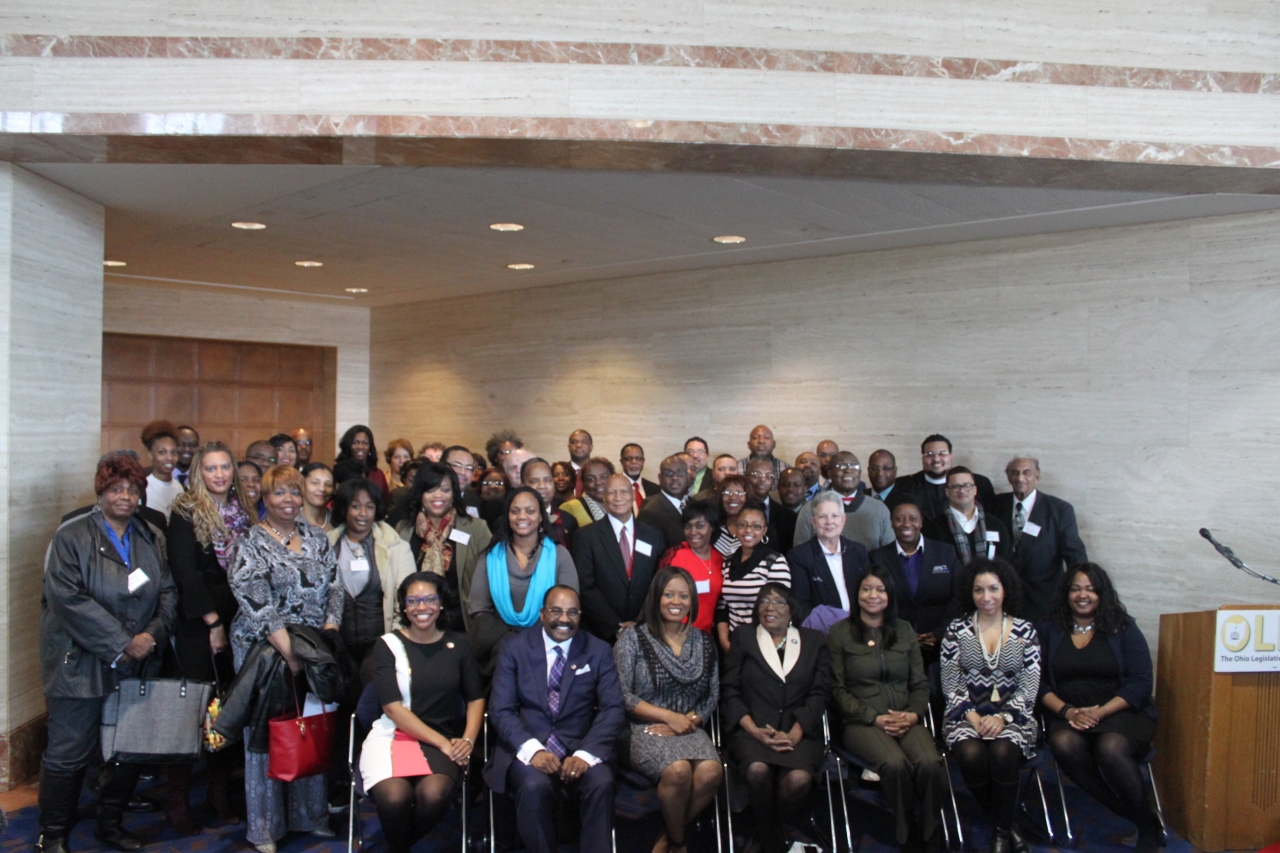 With 34-percent of black Ohioans living below the poverty line and unemployment for black Ohioans being twice the rate of white Ohioans, OLBC members called for action on legislation such as Equal Pay for Equal Work, Paid Family Leave and more state funding for job training initiatives and employing rehabilitated ex-offenders.

“Issues facing black Ohioans impact us all – regardless of your race. When our neighbors and community members struggle to find full-time work or don’t have access to quality schools, our whole state is diminished by the inequalities that persist across the most basic quality of life indicators like education, employment and health care,” said House Democratic Leader Fred Strahorn (D-Dayton). “There is a role for government to put programs and policies in place that root out the most fundamental and systemic inequalities that keep future generations of black Ohioans from reaching their full potential.”

Rep. Kuhns, who welcomed her newborn son into the family just this past year, is leading the charge to implement paid family leave in Ohio.

“After delivering my son and returning to work four short weeks later, I understand firsthand the impact paid family leave can have on a family. Unpaid leave doesn’t help buy diapers or other essentials, and it doesn’t help pay for the rent and bills,” said Rep. Christie Kuhns (D-Cincinnati). “Working families should not have to worry about losing their job or falling behind financially just to take care of a sick child or relative, address their own serious health condition, or welcome a newborn into their family.”

Meanwhile, Rep. Howse is working to ensure women and men earn equal pay for equal work. In Ohio, women earn 78 cents for every dollar paid to men for doing the same job, amounting to a yearly wage gap of $10,805 between men and women who work full time in the state. This adds up to more than 15 months of rent, and almost two years worth of food for a family. Minority women suffer the worst disparity. Nationally, black women are paid 63 cents and Hispanic and Latina women are paid 54 cents for every $1 paid to white men.

“Many African American families rely on the strength and support of mothers and grandmothers. Ending pay discrimination for Ohio workers isn’t just a women’s issue, it’s a family issue,” said Rep. Stephanie Howse (D-Cleveland). “As long as pay discrimination persists, we are cheating families out of their full earning power.”

Public outcry and national demonstrations following the police-led deaths of unarmed African American men has started a new public dialogue surrounding police-community relations and the need for justice reform in Ohio and throughout the nation. The tragic deaths of John Crawford, Jr. in Beavercreek, Tanisha Anderson and 12-year old Tamir Rice in Cleveland and Samuel DuBose in Cincinnati sparked public outrage and debate that the OLBC says can help the state pursue meaningful justice reform.

“Many of us have seen the shortcomings of a broken justice system play out in our own communities over decades and generations,” said Sen. Cecil Thomas (D-Cincinnati). “Americans and Ohioans deserve meaningful justice reform that keeps us safe, treats citizens fairly and restores faith in our justice system. Taxpaying citizens shouldn’t have to worry about whether or not their kids will be safe in their own neighborhoods. Ohioans deserve action on these justice reforms from their state government.”

OLBC members are introducing a dozen bills to enact justice reform, including some recommendations that came out of the state’s police-community relations task force last year. The OLBC criminal justice reform package includes a call for changes in police and law enforcement training, a greater degree of diversity at the at the Ohio Police Officer Training Academy, requiring law enforcement to be equipped with body cameras, and changes to the state’s secret Grand Jury process.

“Too many citizens believe the secret grand jury process in our state has failed to deliver justice for their families and communities,” said Sen. Sandra Williams (D-Cleveland). “That is why I have introduced legislation to ensure the process is fair and transparent, especially in cases where the suspect could be law enforcement.”

OLBC members also addressed Ohio’s infant mortality crisis. Ohio is ranked near the bottom in the nation for the rate of African American babies that die before their first birthdays.

“It is unacceptable that African American babies are dying at more than twice the rate of white infants,” said Hearcel Craig (D-Columbus), who has helped lead the Commission on Infant Mortality. “We must commit to providing families with access to comprehensive healthcare — including prenatal care — to ensure that healthy mothers will be able to bring healthy babies into the world.”

“Akron has the unfortunate distinction of having one of the highest infant mortality rates in the state, as do many of our urban cores,” said State Rep. and Day of Action Co-Chair Emilia Sykes (D-Akron). “We must expand access to comprehensive healthcare and increase education for new mothers and mothers-to-be, so that we can help bring healthy and happy babies into the world.”

Fifty years after the passing of the historic Voting Rights Act, there are new efforts to disenfranchise voters and to weaken the law that allows for all Americans to exercise their sacred duty as citizens. This past election, computer glitches in Hamilton County forced thousands of voters to cast provisional ballots. In Summit County, voters were disenfranchised due to postal errors and saw their ballots go uncounted. OLBC members stood up in both cases to safeguard our most fundamental freedom.

“We’re beginning the next chapter in a new generation’s fight for our most basic and fundamental rights,” said Rep. Reece, who spoke at the 50th Anniversary of the March on Washington. “Even in the year 2016, voters in Hamilton County, Summit County, and across the state are being disenfranchised and denied their right to vote. We must stand arm in arm and petition our government to make voting rights permanent in our constitution, so that we may finally protect the fundamental freedom to vote once and for all.”

Lawmakers also addressed the importance of investing in a strong public education, from universal pre-K all the way through high school, and supporting Ohio’s historically black colleges and universities.

“Education is key to preparing the next generation of black Ohioans for future economic prosperity,” said State Rep. and Day of Action Co-Chair Janine Boyd (D-Cleveland Heights). “From universal pre-k to our historically black colleges and universities, education unlocks the potential of the African American community. We must invest in a public education system that keeps our children engaged and prepares them with the skills the need to succeed in the 21st century.”

The Ohio Legislative Black Caucus was founded in 1967 by African American state legislators under the leadership of State Representative C.J. McLin of Dayton, Ohio. There are 13 active members out of 132 in the General Assembly.