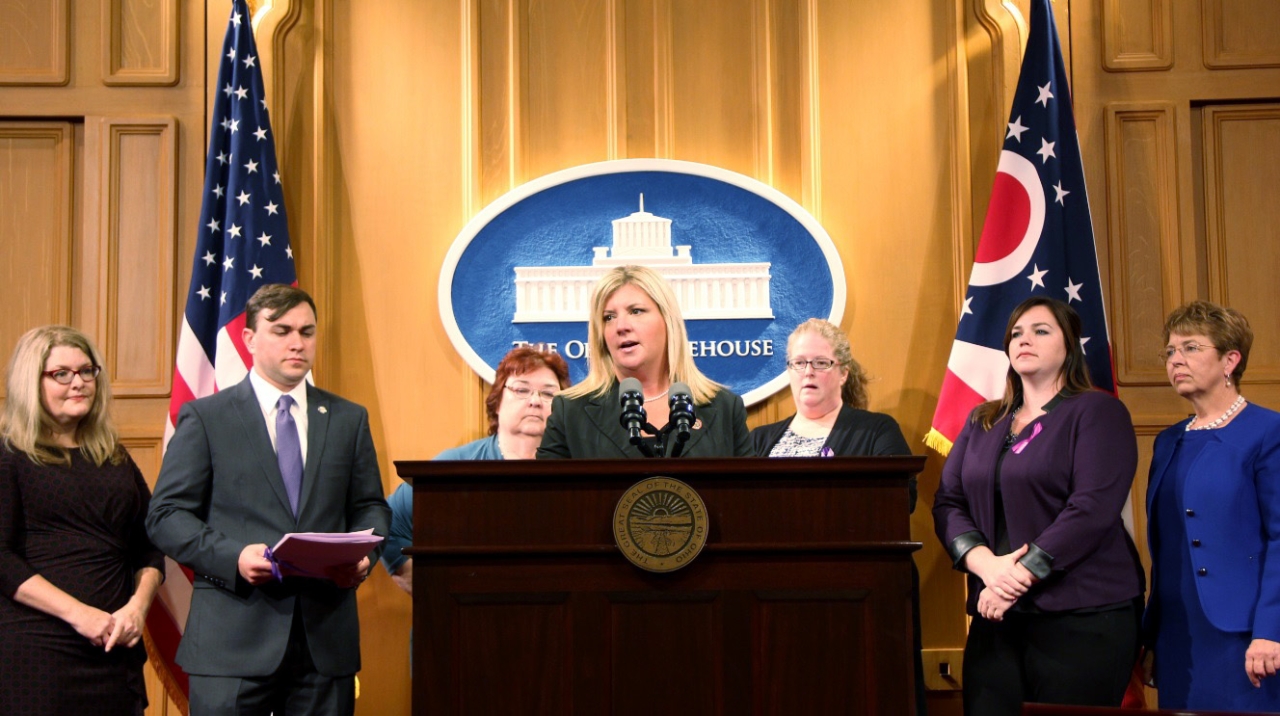 “By changing strangulation from a misdemeanor to a felony we are creating a cooling off period between a first incident and the possibility of a second,” Kunze said. “This cooling off period would allow victims to seek legal or medical assistance that could ensure these women are survivors and not victims and are connected to valuable resources to help them.”

"By increasing the penalty for strangulation from a misdemeanor to a felony, this legislation will increase awareness and facilitate education about the dangers of strangulation and domestic violence," Stinziano said.

Amy Webber and her sister, Niki Miller, attended the press conference and shared the story of their sister, Monica, who was a victim of strangling by her husband. Her husband only served 11 days in jail on a misdemeanor domestic violence charge. Nine months later, Monica was stabbed multiple times and died the following month. “We are very determined to see this legislation pass. And we are very honored and appreciative to be able to be here today and to honor Monica and help save other women’s lives.”

“I applaud Representative Kunze and Stinziano for really taking this to the next level because what we know is that strangulation is potentially lethal harm that deserves to be treated, not just as a misdemeanor, but actually as a felony and as serious physical harm with potential serious consequences,” said Anne Murray, Director of the Domestic Violence and Stalking Unit and Assistant Columbus City Attorney.

Specifically, the bill states that no person shall knowingly impede another person’s normal breathing or circulation by applying pressure to that person’s throat or neck. The legislation increases penalties for strangulation to a third-degree felony.

One exception includes if the offender has previously been convicted of, or pleaded guilty to, two or more offenses of violence, in which case the offense is a second-degree felony.

“This is something we have thought needs to happen in Ohio for a very long time now,” said Nancy Neylon, Executive Director of the Ohio Domestic Violence Network. “I want to be able to stand here one day and not have to have legislation because of what happened to a victim. I want to be able to say ‘no more’ and mean it because it is time we stop losing victims to domestic violence. I think this legislation is a great way of doing this.”

“There is a growing body of research that has shown strangulation to be a very lethal form of violence,” said Ruth Downing, Founder and President of Forensic Healthcare Consulting. “The health consequences may only be temporary, but many times are permanent and life-long. Strangulation is the ultimate form of power and control. One does not need to have a gun. One only needs to reach out his hand and he controls her very next breath.”

HB 362 will soon be assigned to a standing House committee. Full coverage of today’s press conference is available here: http://www.ohiochannel.org/MediaLibrary/Media.aspx?fileId=147511