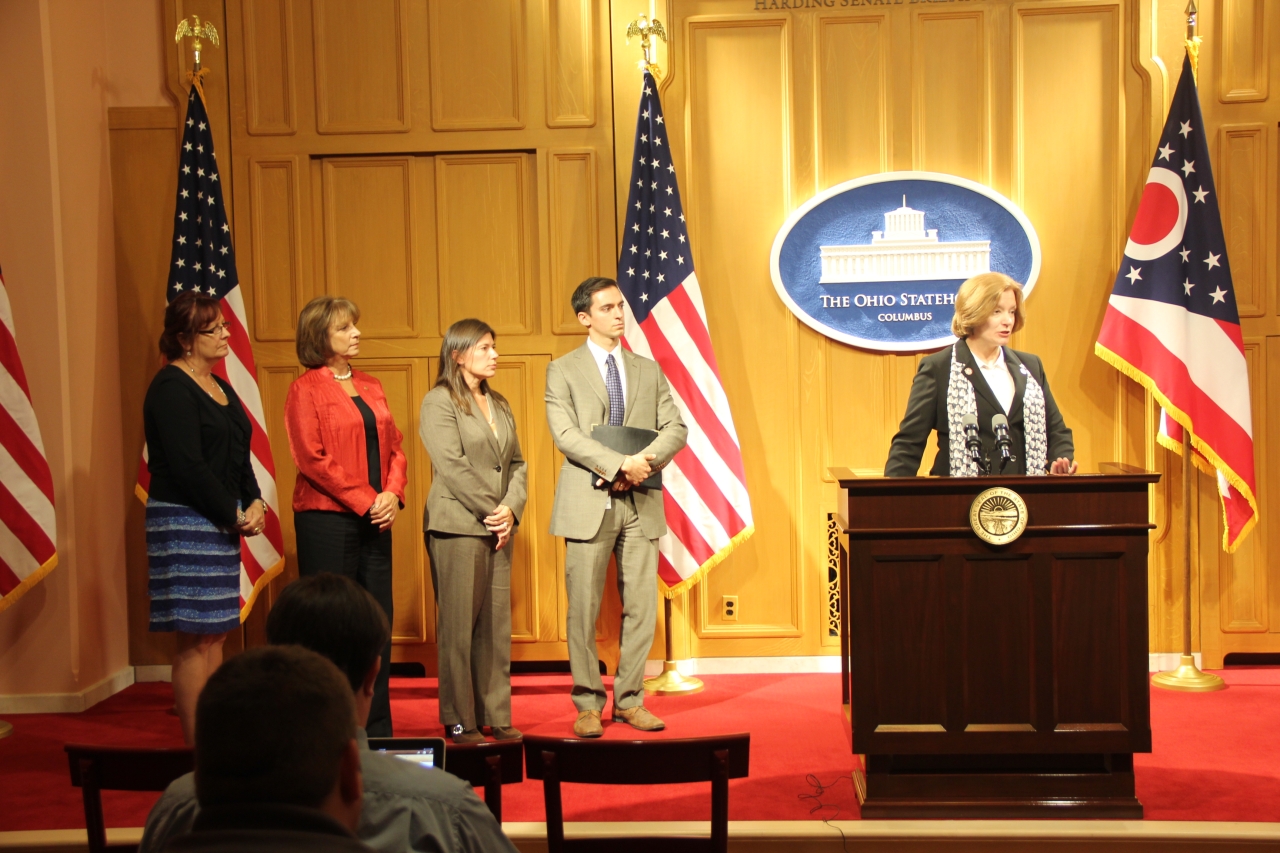 COLUMBUS—State Representative Marlene Anielski (R-Walton Hills) yesterday held a press conference at the Ohio Statehouse to discuss efforts to address and prevent youth suicide, the “Silent Epidemic.” She was joined with Tracy Plouck, Director of the Ohio Department of Mental Health and Addiction Services; Navy Commander Lou Terhar, State Representative of the 30th District; Debe Terhar, President of the Ohio State Board of Education; Michael Hoffman, Ohio Representative for the Jason Flatt Foundation; and the American Foundation for Suicide Prevention.

Representative Anielski was successful in passing House Bill 543, the "Jason Flatt Act, in honor of Joseph Anielski" which mandates public school personnel to complete training to recognize the signs of those who may be at risk of harming themselves. House Bill 149, which designates every September 10th as "Ohio Suicide Prevention Day" was sponsored by Representative Anielski as well. Both unanimous bills became law last year.

In an effort to build upon past legislation, Representatives Anielski and Stephanie Kunze (R-Hilliard) are joint-sponsoring House Bill 609. The proposed legislation mandates each public institution of higher education to have a suicide prevention program consisting of five criteria. The Ohio Board of Regents and the Ohio Department of Mental Health and Addiction Services will have FREE materials posted on their respective websites, which will qualify for each criteria.

“It is my intention to bring awareness to the 'Silent Epidemic' that is affecting our most precious gifts, our children,” said Rep. Anielski. “For many students, college is the first time they have been away from their family, friends, and childhood home. This new life stage can be stressful and unsettling. Students need to know all the programs and help that are available to them and their friends should they ever find themselves struggling.”

“Of the 34,000 people who commit suicide every year, 20 percent or 6,500 are veterans,” said Representative Terhar. “There is a critical need for raising awareness and support. Representative Anielski’s commitment to do so is unmatched by anyone I’ve ever met. As Chairman of the House Veterans Caucus, I can say we all stand firmly behind her efforts.”

“According to the CDC, suicide is the second leading cause of death among young people in Ohio between the ages of 15 and 24,” said Ohio Attorney General Mike DeWine. “It is critically important that we offer resources to Ohio students on this difficult topic to raise awareness about the signs and symptoms of those who may be considering suicide in order to help save lives.”

In its 2011 Youth Risk Behavioral Report for Ohio, the Center for Disease Control reported that one in seven Ohio students said they had “seriously considered suicide” in the past 12 months. Slightly more than one in seven had actually “made a plan to commit suicide” in that time. Additionally, one in 11 Ohio students reported “attempting suicide one or more times in the past 12 months,” nearly 50 percent higher than the national average.