“The school district report cards are not just confusing and inaccurate, they are often times just plain wrong,” said Smith. “That is why there is bipartisan support to end the state takeover of local schools that relies on such a faulty measure.”

State Rep. Nickie Antonio (D-Lakewood) today expressed her support and applauded council members’ leadership in the passage of the human rights ordinance by Cuyahoga County Council. The ordinance passed by an 8-3 majority Tuesday evening, making Cuyahoga County the first county in Ohio to ban discrimination in employment, housing and public accommodation based on sexual orientation, gender identity and gender expression. It will also create a human rights commission that will investigate and rule on complaints.

“This is both a civil rights and an economic issue,” said Rep. Antonio. “I am hopeful that the passage of this important county ordinance will be instrumental in helping statewide efforts to ban discrimination against people in the LGBT community. Nondiscrimination policies have the potential to serve as an economic catalyst to drive innovation, spur investment and attract the best and brightest to Ohio. Above all, it is the right thing to do.”

State Rep. John Patterson (D-Jefferson) today announced over 1,700 schools throughout the state will share in some $12 million in school safety grants made possible through the Jefferson lawmaker’s bipartisan legislation, House Bill 318. The state grants require local schools and county board to work with local law enforcement to determine the best use of the funds.

“The ability to foster safe, healthy, and supportive environments in schools is crucial to the wellbeing and education of our children,” said Patterson, “When we invest training, safety equipment, and critical educational and mental health resources, we invest in their future.” 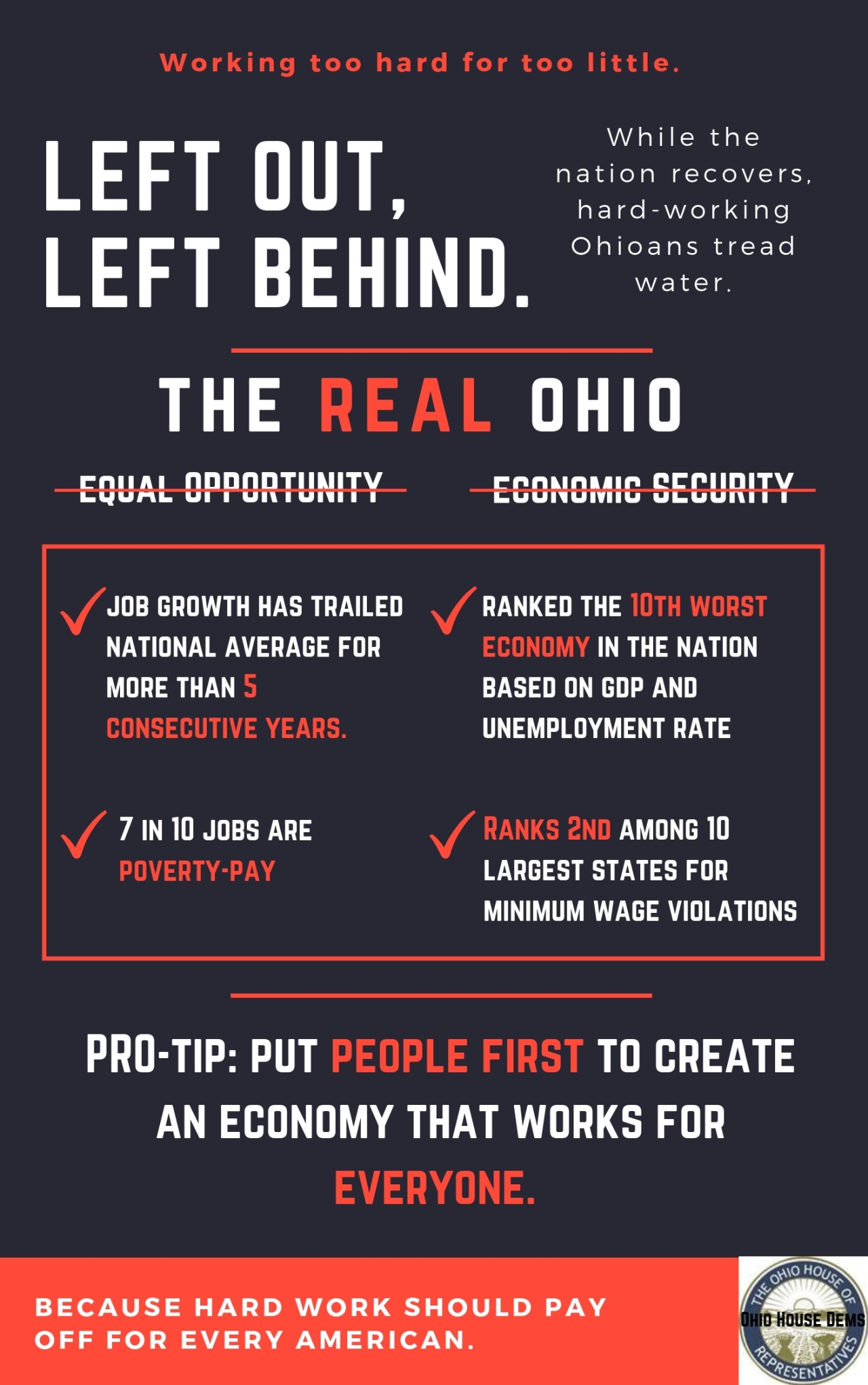 As the nation continues to recover from the global economic recession of 2009, the Buckeye State has largely been left behind in the recovery, a fact that two lawmakers said in part prompted their new proposed state law change to require an annual performance audit of the state’s economic development entity, JobsOhio.

Though JobsOhio is a nonprofit organization that uses public money for economic development and job creation, it is exempt from public performance audits, unlike similar organizations that use taxpayer funds.

State Reps. Kent Smith (D-Euclid) and Thomas West (D-Canton) hope to change that with legislation announced today that would hold JobsOhio to the same standards and level of transparency that taxpayers have come to expect from organizations that receive public money.

“Today's release of the state report card is further evidence that the biggest hindrance to student performance in Ohio's public schools is not the district leadership of East Cleveland but the politicians of Columbus who take campaign contributions from the charter school industry with one hand as they give public school dollars to charter school operators with the other hand,” said Smith, a member of the House Education Committee.

East Cleveland Schools have lost over $5 million to failing, for-profit charter schools like ECOT while the state has cut the schools by millions of dollars in previous state budgets.

The district is also considered to be the poorest community in the state and the fourth poorest in the nation, with 100 percent of students being considered economically disadvantaged according to ODE data.

“In spite of these substantial challenges East Cleveland City Schools have made tremendous progress, due in part to the extremely talented core of teachers, most of whom have a master’s degree and average 15 years of classroom experience,” said Smith.

“Local control and the local perspective is needed to adequately determine the success or growth opportunities for Ohio’s students and educators,” said Rep. Fedor. “Ohio has many different communities. There is no one size fits all approach. We need to be more responsive and responsible in issuing grade cards.”

According to the Ohio Association of Comprehensive and Compact Career Technical Schools (Ohio CCS), Ohio has 91 Career Technical Planning Districts and three career-technical delivery models at the secondary education level focusing on workforce development. The “Prepared for Success” component of the CTE Report Card, however, only includes credentials related to “Ohio’s In-Demand Occupations.” Institutions successfully preparing students for careers will be penalized with low component grades, even if students obtain the knowledge and skills necessary to enter the workforce.

Pointing to the role poverty can play in academic performance, Rep. Fedor said the Ohio School Report Cards A-F measurement doesn’t accurately reflect whether administrators and educators are working hard to address the complex challenges within their buildings.

“The Affordable Care Act has been instrumental in Ohio’s ability to expand Medicaid and provide private insurance options to over 157,000 Ohioans, which dramatically reduced the amount of people without insurance in Ohio,” Rep. Sykes said. “The Attorney General must act to protect Ohioans’ healthcare.”

"As Americans we believe in the value of hard work, and know that punching a time clock, laying brick, or standing behind a cash register shouldn’t mean you can’t afford to plan for you and your family’s future.

But when a wealthy CEO can make millions on Wall Street by betting against American people, and a working mom with kids can’t afford to take a family vacation once a year, something’s wrong. 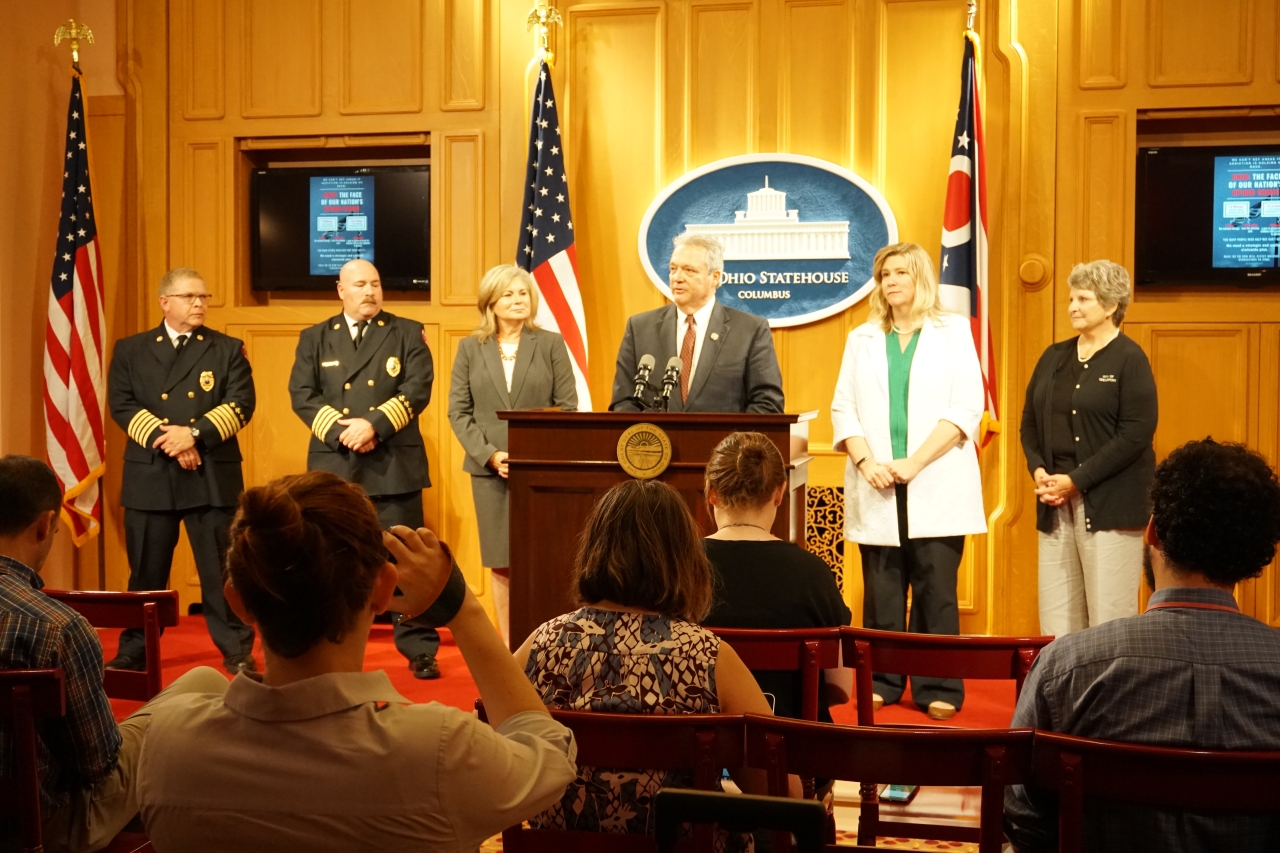 “We need more than a piecemeal, ad-hoc approach. What works in Dayton may or may not work in Columbus or Canal Winchester, but we frankly just don’t know without a strategic partnership from the state,” said Nan Whaley, Mayor of Dayton. “A coordi