State Rep. Michele Lepore-Hagan (D-Youngstown) has urged Speaker of the House Cliff Rosenberger to convene a special session in order to hold a vote to override the governor’s veto of a budget provision related state developmental centers. Lepore-Hagan’s bipartisan provision in the recently passed state budget would have stayed the closure of the Youngstown and Montgomery Developmental Centers until further review by a 13-member commission. 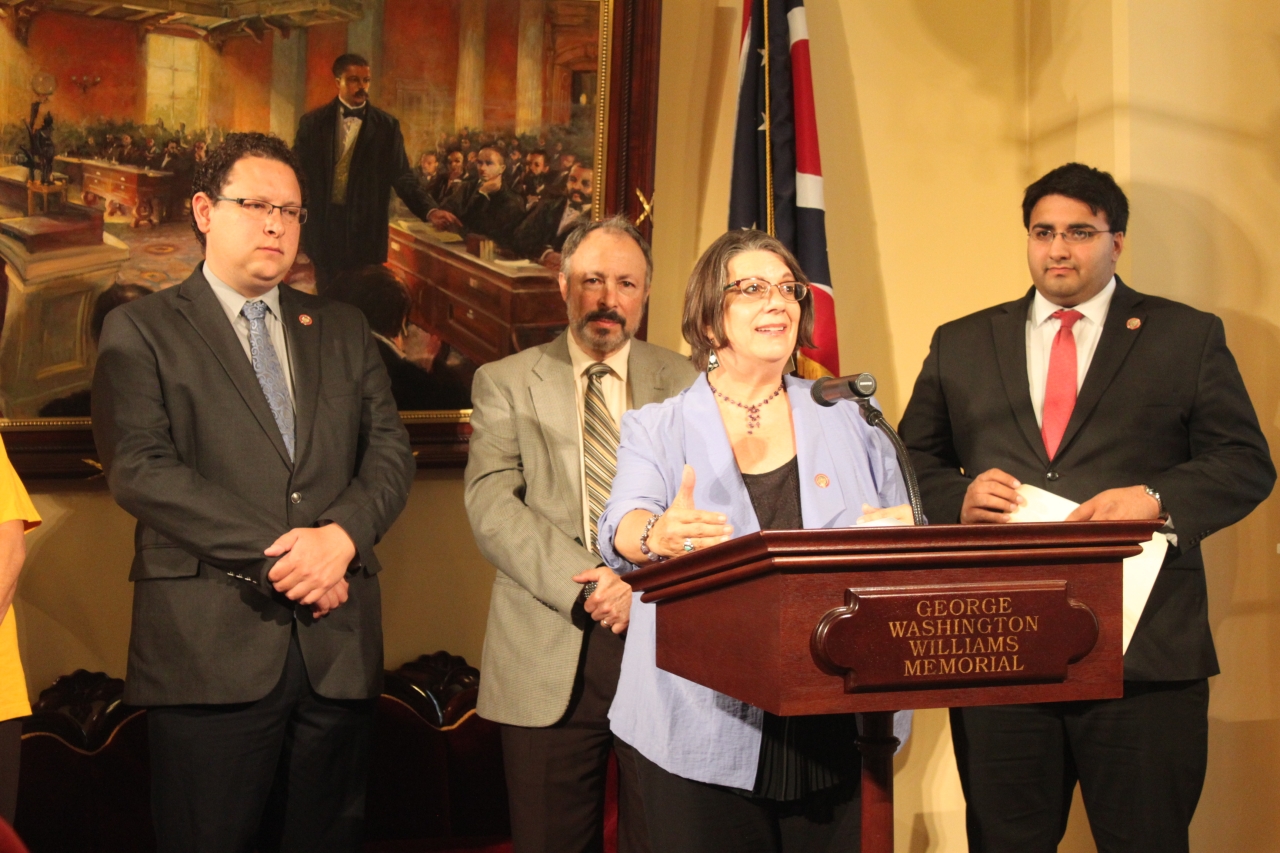 State Reps. Nickie J. Antonio (D-Lakewood) and Niraj Antani (R-Miami Township) today called for an end to capital punishment in Ohio and introduced bipartisan legislation to abolish the death penalty and replace it with a life sentence without parole.

In a letter sent today to The University of Akron President Scott Scarborough, Rep. Greta Johnson (D-Akron) expressed her concern over the recent announcement that UA will begin charging an additional $50 per credit hour for upper level classes.

Ohio State Rep. Alicia Reece today hosted the Second Chance Job Fair in her district at the New Prospect Baptist Church in Cincinnati. The event features employers from manufacturing, non-profits, restaurants, government agencies and construction industries who have immediate job openings. During the kickoff, Rep. Reece announced that she will seek the creation of a community Reentry One Stop in Cincinnati.

“The importance of actively reaching out to and educating at-risk youth cannot be overstated,” said Fedor. “Youth Pages Toledo extends life-saving information directly into the hands of those who need it most.”

The governor vetoed Lepore-Hagan’s bipartisan provision in the recently passed state budget that would have stayed the closures upon the review of a 13-member commission.

In a letter addressed to the chair of the House Government Accountability and Oversight Committee, Rep. Lepore-Hagan wrote, “At minimum, there should be a robust and transparent review of all facts before the state decides to take action. House Bill 73 would ensure that such a review takes place, and it would provide the opportunity for residents, families, employees and the surrounding communities to have their voices heard.”

Text of the letter can be seen below:

Clyde responds to sale of state prison properties in HB 238

State Rep. Kathleen Clyde (D-Kent) released the following statement in response to the passage of House Bill 238, which will allow the state to sell the North Central Correctional Institution and Turtle Creek Center.

“I oppose the sale of the North Central Correctional Institution and the Turtle Creek Center because privatizing state prisons is the wrong direction for Ohio.

“The state recently sold the Lake Erie Correctional Institution, and the results have been disastrous. Since this sale 18 months ago, there have been 248 security complaints, compared to 157 such complaints in the eleven years prior.  Also, after the sale, the facility immediately added 300 more beds, and has suffered serious overcrowding problems and hazardous conditions for inmates and workers.

“Private prison management companies have bad track records in Ohio. For example, Corrections Corporation of America was fined $500,000 by the state because of a 300 percent increase in prisoner-on-staff assaults and a 187.5 percent increase in prisoner-on-prisoner assaults. The financial records for these private companies are not transparent, and we still aren’t sure if money is being saved or how these many problems are being addressed.

“These last-minute additions to House Bill 238 have not been vetted.  The Ohio Department of Rehabilitation and Corrections did not provide testimony to the legislative committees hearing this proposal.  A lot of questions and concerns remain, and the governor should veto this rush authorization of sale.”