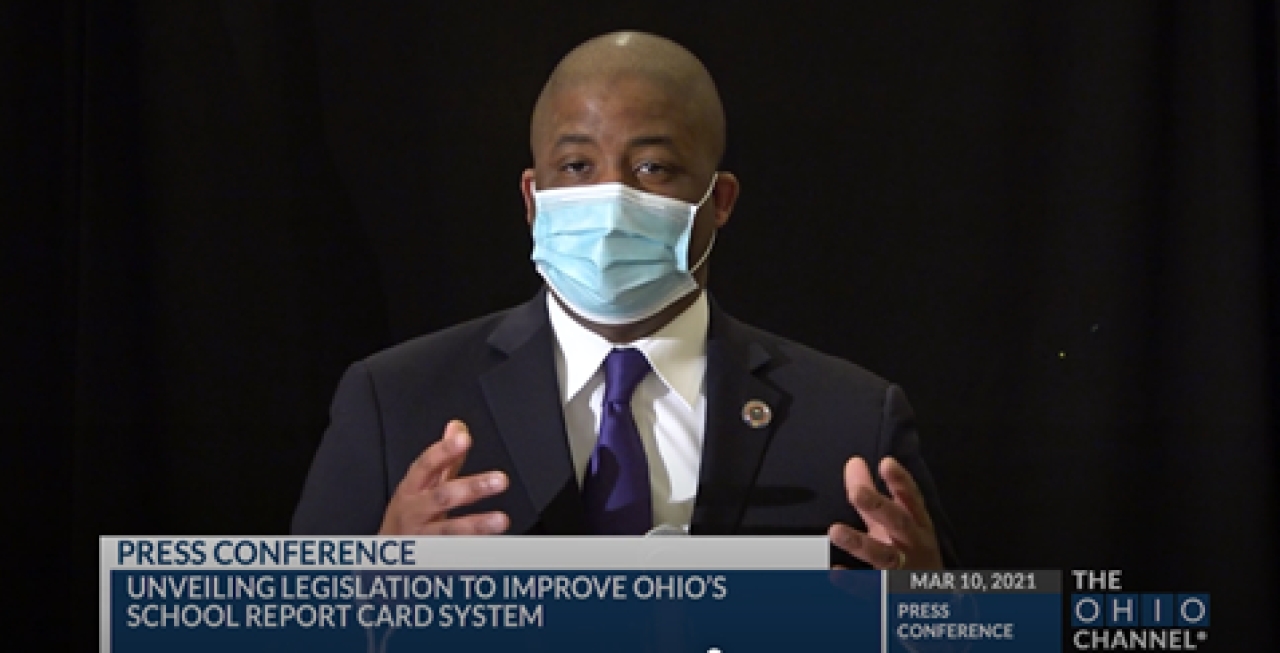 State Rep. Phil Robinson (D-Solon) and State Rep. Don Jones (R-Freeport) today introduced legislation that would improve Ohio’s school report card system. The proposed legislation would make several changes to Ohio’s current report card system with the intent to change the current system from one of flawed metrics and punitive measures to one that provides a document that schools, parents and communities can understand and use to properly assist when making improvements to a school.

“Our current state report card system isn’t working for schools, students, and our communities. With nearly 60 co-sponsors, this bipartisan legislation will begin to help address the long-lasting, systemic issues in Ohio’s education and end the piecemeal changes approach that has been failing our students.

At the heart of every community is a school and our children. Ohio’s promise of better lives and brighter futures begins in the classroom. In the same way that our children are more than a letter grade on a test, we know our schools are also more and can only better serve our children with a better evaluation system,” said Rep. Robinson.

The bill would eliminate the current “A” through “F” grading system and replace it with new performance ratings:

It would also require the State Board of Education to adopt rules to establish performance criteria for performance ratings and a method to assign them to performance measures. It also does away with the “overall grade” of buildings and school districts, rating only each component.

“It was our goal through the entirety of this process simplify the state report card, give it real meaning and to make it more proactive all while continuing to comply with federal guidelines. This new approach will make the report cards easier for students, teachers, parents and school officials to understand and learn from. From there, they will have a more streamlined approach in processing any necessary changes that might need to be made to make each school throughout Ohio as successful as possible,” said Rep. Jones.

The legislation is the result of the findings and suggestions from the Ohio Report Card Study Committee, established in the operating budget of the 133rd General Assembly and an additional, more specialized workgroup led by Reps. Jones and Rep. Robinson. Members of the workgroup included:

Robinson and Jones held a press conference this morning to announce the legislation. They were joined by:

·         Superintendents from the working group, Cameron Ryba and Marlon Styles.

“This legislation is an important step in improving Ohio’s school report card so that it is a fairer, accurate reflection of the great work being done in Ohio’s schools,” said Exec. Dir. Axner. “We applaud the efforts of all involved as they have worked to create a transparent report card that informs students, parents, educators and communities, leading to a culture of continuous improvement and excellence in Ohio’s education system.”

“Nothing about an overall school letter grade properly informs a parent or community about what is going on in their schools. Just as every student is more than a test score, every school district is more than a letter grade,” said Chief Exec. Officer Lewis. “Thanks to the bipartisan work of Jones and Robinson and school leaders across the state, we can work together to right this ship and restore the reputation of our schools while providing concise, clear and helpful information to parents and communities about the educational quality of their schools.”

“These positive enhancements will allow school districts and schools to tell their stories beyond the test scores that measure a mere snapshot in time,” said Exec. Dir. Rowan. “Communities now will be able to learn more than ever before from their state report card, like learn how many of their students have obtained industry-recognized credentials or view multiyear trend data. We owe it to parents to provide them a tool that is accurate, fair and concise. This bill fulfills that promise.”

The bill has 58 co-sponsors and now awaits an assignment to a standing House committee where it will move through the legislative process.