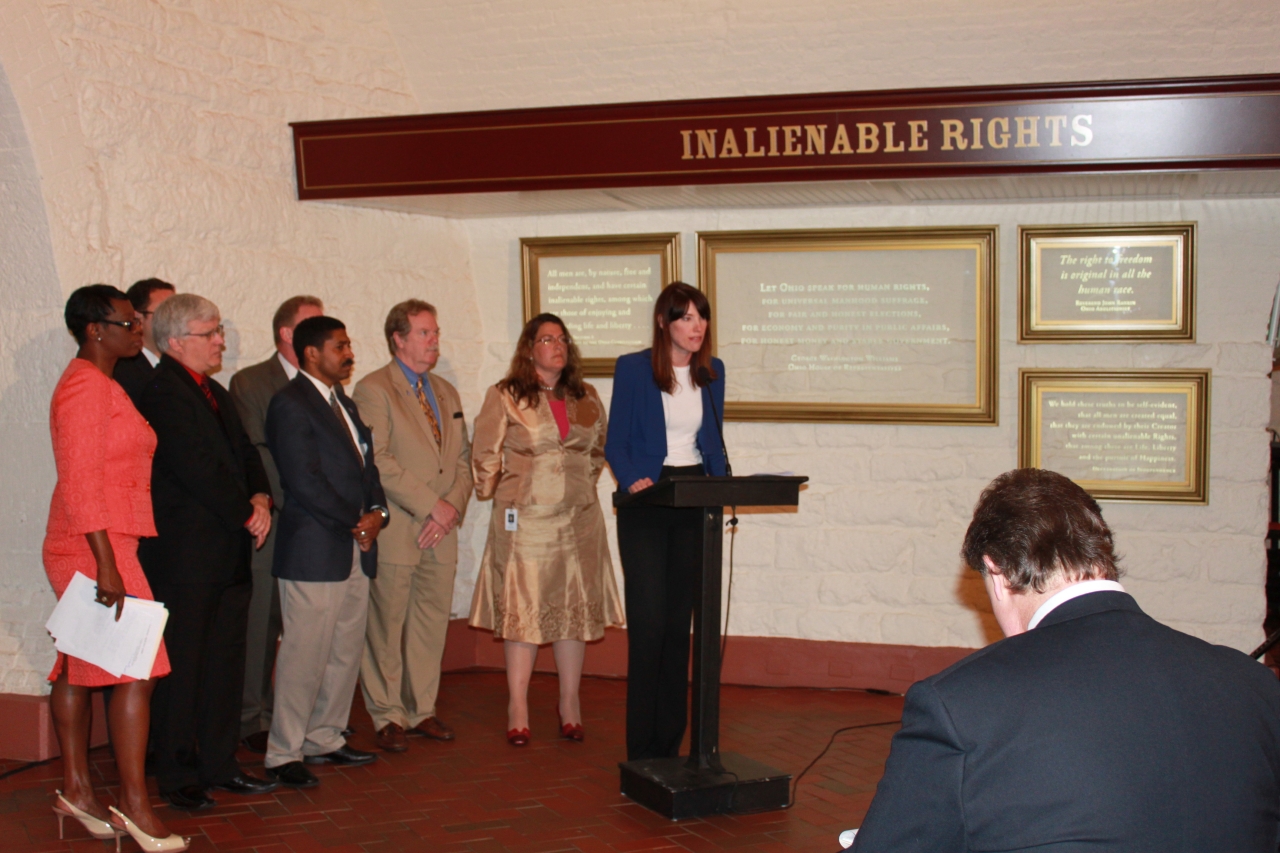 Ohio House and Senate Democrats held a press conference today to lay out all of the attacks on voting rights by the Ohio GOP so far in this General Assembly and the impact that GOP voter suppression tactics are having on real voters in the House District 98 Election Contest.

Today the Ohio House is set to determine its’ own fate and vote to throw out the votes of dozens of voters in order to ensure one party rule.  This is a clear violation of the Civil Rights Act, which contains voting rights protections in it prohibiting insignificant paperwork errors by anyone to cause a vote to be thrown out.  And yet, today the Republicans will vote to throw out at least 52 ballots in the HD 98 election contest for just that reason.

“The Ohio GOP has attacked voting rights over and over again during the last several months, let alone the attacks that they perpetrated on Ohioans’ voting rights before this General Assembly.  Their attacks have been slow, quiet, and methodical, and often disguised as something that is good for voters but with a nefarious purpose lurking beneath that disguise” said Rep. Clyde.  “In the election contest that will be decided today, the Republicans will apply their vote-suppressing approach to at least 52 voters from Tuscarawas and Holmes counties by ignoring all the evidence and not counting their votes.”

Republicans have been working to restrict voters’ access to the ballot box by failing to comply with the federal Motor Voter law.  This law was designed to increase voter registration and increase voter participation, but Secretary Husted is using the Motor Voter law as an excuse to take voters off the list with aggressive purging practices.  Just two weeks ago, on primary election day, the Ohio Secretary of State failed to make sure that the last 3 days of early voting were open for all voters.  After fighting to close the polls 3 days early last fall for the presidential election - all the way to the US Supreme Court - and losing, the Secretary again violated the United States Constitution.

“We are headed down a dangerous path of disenfranchising and disempowering voters in this state,” said Sen. Turner.  “As George Washington Williams Ohio’s first African American legislator said, ‘Let Ohio speak for human rights, for universal manhood suffrage, for fair and honest elections, for economy and purity in public affairs, for honest money and stable government.’”

Little more than five months into the 130th General Assembly, the slow and steady attacks on voting rights continue with multiple pieces of legislation designed to make it harder for Ohioans to exercise their right to vote.  Quietly, an attack on student voters was placed into the budget in the form of an amendment that would force Ohio universities to stop charging students out-of-state tuition if they are provided with a letter from the university to be used as voter identification.

“Our duty as legislators is to ensure all citizens are heard at the polls, not to discourage young voters from exercising their right to vote” said Rep. Phillips.  “We should encourage student voters to take responsibility, participate in their communities by voting, and welcome these young adults to their responsibilities as citizens; not erect obstacles to their fundamental right to vote.”

Senate Bill 109, claims to authorize electronic poll books and also claims to allow for the counting of votes where the voter both selects a candidate and also writes in the same candidate on the write-in line, often referred to as double bubble.  In reality, this bill would allow for votes to needlessly be thrown out even when voter intent is clear.  Senate Bill 47 would restrict voters’ right to petition their government and make it harder to referendum extremist bills like SB 5 and HB 194.

“We continue to fight these attacks and win in the courts and with the voters through referendum, but it hasn’t stopped.  Republicans continue to fight to slowly make it more difficult for Ohioans to get to the polls and to ensure their voices are heard.  We will never stop fighting back,” said Sen. Turner.